There's little to zero chance that you're either a). computer scientist or b). web developer or even c). computer enthusiast, and haven't came across or at least heard of regular expressions.

It wasn't until recently that I digged a little deeper into regular expressions. I came across a few great articles or in-book chapters on that subject, such as:

Prior to that I just copy-pasted a regular expression I found googling, mosty for validating emails and similar tasks.
The Regular Expression Syntax table below, which I use as a cheat-sheet was a real eye-opening for me. It is broken down into the smallest units, expressions, which are easy to understand.

Above, there is a table I really wish someone would introduce me to at the time I came across with regular expressions. Syntax being broken down in fundamental units is way more readable and understandable. That way you can start applying simple syntax and add up to form real complex examples as seen in the top of this article.
Learning curve might be steep, but the outcome is tremendous! 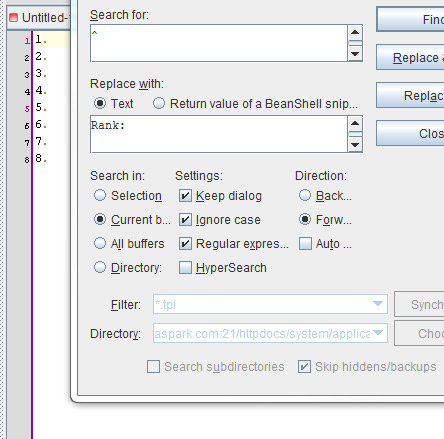 Let's assume you do use a text editor that supports regular expressions. Imagine you have a list of numbers or strings that you need to prepend or append something (number, or string). You can do that by hand, which is probably quicker if your list is relatively small. But as the list grows longer, regular expression is your friend.
Use expression ^ to match the beginning of the line or $ to match the end of the line and replace it with whatever you want to replace it with.

The example on the right image does just that. It searches for the beggining of the line and replaces it with "Rank:", so it basicaly prepends the desired string.

Example below is pretty common.
Each row contains a string (in our case, the name of a U.S. state) and some number (its census population). Presume the number is not relevant to us, so we want to delete it. We use expression \t which indicates tab character and a sign +, which stands for "one or more of previous r.e." (in our example, a number is separated from the state with one or more tabs). To search for digits, we use \d, which is a shortcut for "any digit" from 0 to 9. Alternatively, we could use [0-9]. We use + again, because there are few digits that represent census population of each state. 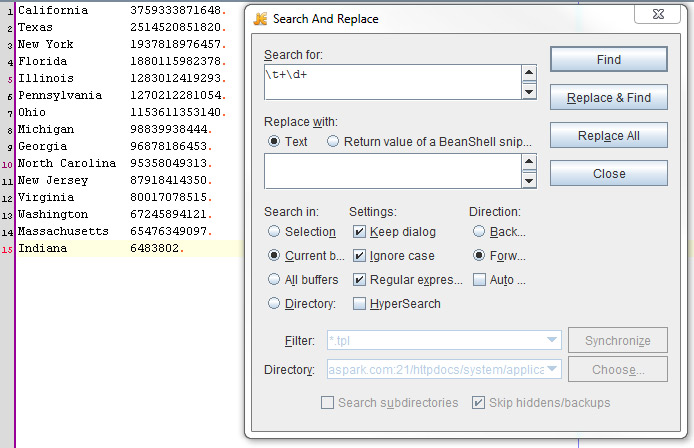 If we were only interested in census population, the regular expression to search for U.S. state names would probably be: [a-z\s]+\t+.

Do you often work with lots of data? Do you use regular expressions at all? If so, when, where and how often? However, if you do, I would recommend you to take a look at Google Refine, which is a powerfull tool for working with messy data, cleaning it up, transforming it from one format into another, extending it with web services, and linking it to databases like Freebase.